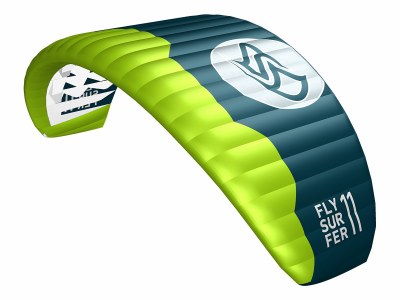 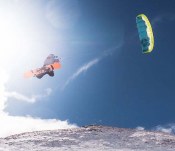 The Flysurfer Peak4 is a monoskin kite that is perfect for all level of riders looking to take their land and snow kiting to new levels with unprecedented performance and handling.

Hybrid Wingtip Technology consists of two self-inflating cells on each wingtip of the kite. The openings are protected with mesh material to prevent entry of snow or dirt. The more efficient aerodynamics of the wingtip allows for tighter turning with constant pull, as well as increased backstall resistance. Through that the bar feedback has been improved considerably, and the flapping of the tip is almost eliminated, giving the PEAK4 a sporty but familiar and confidence inspiring feeling.

The B-Safe System is guided along the B-Level attachment points, through polypropylene sliding rings. After activating the quick release, the bar slides up the 5th line and the kite is reefed horizontally in the middle. This removes the pressure in the kite and allows it to come down powerless through the wind window. The PEAK4 can then be reactivated immediately and can be restarted in the power zone. Independent launching and landing of the PEAK4 is fully supported by this safety system.

The Single-Skin foilkite concept has a very efficient depower and allows for immediate loss of power using the bar throw, offering the PEAK4 high levels of safety on the mountain. Its performance and unparalleled traction generate amazing power per square metre. Increased profile curvature for the PEAK4 maximises lift and agility. The most obvious benefit of the Single Skin concept is the reduced mass of the kite, allowing the PEAK4 to be stable whilst flying at the edge of the wind window in the slightest breeze, without overflying and remaining easy to control in low to high winds.

The PEAK4 uses our proven material mix of DLX+ & X-Light cloth, as well as new reinforcements in areas subject to particularly high loads such as the leading edge, the wingtip and the trailing edge of the kite. The single skin concept simply collapses during hard crashes on the leading edge, and therefore can not burst or be badly damaged. The new outline of the PEAK4, the reduced number of cells and bridle layout, in addition to the use of X-Light cloth used for large areas of the canopy, result in an incredibly light kite, which has the smallest pack size and is therefore perfectly suited for kite touring.

This product has not yet been reviewed.

Please login or register to write a review for this product.